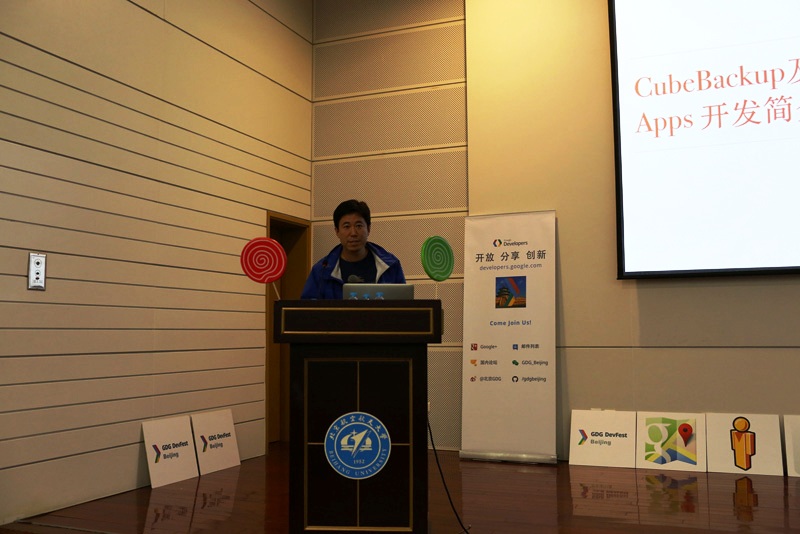 Last weekend, I was invited as a lecturer in the Google Developer Group DevFest 2014 Beijing to introduce Google Apps development as well as our product CubBackup. DevFest is the biggest annual activity for GDG, where developers who are interested in Google’s technology can meet each other and learn new technologies together.

Though most of Google’s services are blocked in China, there are still lots of developers/fans of Android, Chrome, HTML5, Android Wear, etc. More than six hundred of developers came to GDG DevFest Beijing this year!   I am glad to know some excellent developers there and really impressed by them.  This is also my first time to meet some famous developers face to face whom I already know on Internet before.  Some young developers are teenagers in junior high school ( I knew nothing when I was in their age ).

Topics in this DevFest cover Android Ware, Material Design, Android Lollipop, Polymer, HTML5 and so on.  I learned a lot  in all the technical sessions, however, what impressed me most is the creative spirits there. All people are talking about technology trend, open source projects, start up a new business… Beijing is just like another Silicon Valley in Asian.

I introduced Google Apps and shared some of my experience on how to develop on Google Apps platform in this DevFest activities.  It was an amazing experience to communicate with so many Google developers face to face.